Posted on September 24, 2017 by Lindsay Jamieson 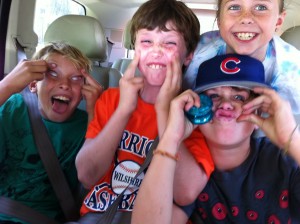 My kids don’t play soccer, but by the size of my vehicle, other motorists might mistake me for a “soccer mom.”  No, I don’t have an AYSO sticker, but I do have an SUV.  A Volvo XC90, just like 20% of the other moms in the carpool line.  When I first bought this car, I felt like a pig.  I tried to give it back – seriously – because I hated it so much.  We can’t even discuss the mileage.  But the truth is, the other day I picked up six kids from school, reducing the number of cars in the line, which stretches around the block, by three.  This weekend I am already scheduled to drive several boys to their baseball games and several girls to rehearsals.  Most of the time, when someone asks if I can drive their child home, I can say yes, because I have room, unless of course, my kids already have a ride with another SUV mom.

I know, we SUV moms have a bad reputation, and maybe we deserve it.  Yes, sometimes I am a bully on the road, but only if you’re texting at a stop sign while my kids are waiting at some field or in some lobby or in the hot sun at school. I am either in a hurry to collect them or more of a hurry to unload them.  There is nothing like eight-year-olds and eleven-year-olds (and all ages in between) fighting over Justin Bieber to make a mother step on the gas.  So if you’re blocking a two-way driveway, yes, I might use my big ass tires to hop the curb.  I don’t have time to wait in the oncoming traffic for you to find just the right opening.  God forbid anyone in my carpool is tardy because you slowed down to check your email or dial a call.

I try not to honk.  Honking just doesn’t fly in LA like it does in New York.  Instead I sit behind cars going 5mph in a 30mph zone and say things like: “Are you kidding me?”  “Honk,” my kids yell.  Joe has even reached over and hit my horn himself.  But with all the rides I’ve driven over the past nine years, one thing I know is that I don’t have time to get into a honk-induced road rage war.

Here are some carpool highlights that might explain the grimace (or smile) on this turbo driver’s face:

I turned to see a boy with a red rash on his cheeks, sweat in his hairline.

“Last night. I had a fever of a hundred and one.”

“Your son has scarlet fever,” I told his mother when I dropped him at her door.

(The doctor confirmed I was right.)

“Yes?”  We were in thick afternoon traffic.

I turned to see the little girl clearly ready to burst.  Nothing like dragging three six-year-olds into a public restroom at a neighborhood park.

“Don’t touch anything,” I said.

“What is it with this family and reggae?”

“I think Justin Bieber is talented,” Tess said the other day.

“He sucks.  He only sings about girls.”  Ronan was about to pull out his hair.  Tess had been singing for five blocks.

“What else is there to sing about?”  Tess said.

Mostly, the kids are hilarious.  They talk about the things they would do if they had “all the money in the world”; the teams they love or detest (there is no grey area it seems); the music they listen to (also black and white).  I hear some great jokes and some real stinkers, all of which get about the same amount of laughs.  Some kids are helpful, telling me where to turn to avoid a long left-turn lane.  Some kids inform me that their mother would never let them eat the snack my kids have or listen to what’s playing in the car.  There is the ongoing messy-car competition, which I usually win.  Honestly, I feel privileged to have a seat with such a great view, a window into their generation.  It’s worth all the crumbs and tears, the bubble gum stains and rotten banana peels – the germs!  It’s even worth the dirty looks I get from Prius drivers, even though my full car cuts my footprint.  At the end of each trip, I get such a sweet reward:

“Thank you so much for the ride, Mrs. Gallagher.”

Author of Beautiful Girl, mother of 2, wife of cinematographer, former dancer, snowboarder -- recovered bulimic.
View all posts by Lindsay Jamieson →
This entry was posted in Uncategorized. Bookmark the permalink.